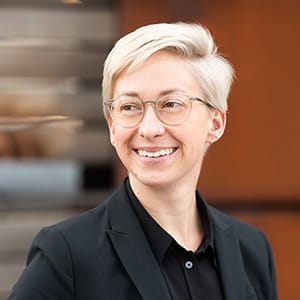 (Boulder, Colorado) – According to the 2020 AIA Guide to Equitable Practices, women and people of color have less access to leadership roles and are often viewed as less innovative. That must change. The profession needs to do a better job of amplifying diverse voices and promoting equitable career advancement. Ferguson Pyatt is proud to be a part of the change as a newly certified Women-Owned Business.

The new identity and website (fergusonpyatt.com) acknowledges the contributions of partner Janna Ferguson, AIA, who has played a vital role in the firm’s design work and activism for nearly a decade. Ferguson joined Pyatt Studio in 2012 after graduating from the University of Colorado at Boulder (CU). Since then, she’s overseen some of the firm’s most complex projects while engaging her professional community as an active member of AIA Colorado, serving as co-chair of the Justice, Equity, Diversity, and Inclusion Committee.

“Architects are uniquely positioned to address some of today’s most pressing social and political issues — and I believe they have a responsibility to do so. I’m grateful for the opportunity to lead by example,” says Janna Ferguson.

Founding partner Rob Pyatt, AIA, LEED AP, has known Ferguson since she was his student at CU, where Pyatt led an interdisciplinary curriculum focused on community-based design and sustainable construction. The two quickly discovered they shared a hands-on approach and commitment to respecting the land. “Janna has inspired me since she was a student. Her talent, passion, and insight have shaped the firm for almost as long as it’s existed. It was past time for our identity to reflect that,” says Pyatt. “We need to recognize younger leaders in the field,” adds partner Heather Kahn-Pyatt, “We need different perspectives and different voices.”

Founded in 2010, Ferguson Pyatt is known for its collaborative process and commitment to cultural, environmental, and economic sustainability. Their work is place-based and site-specific, drawing heavily on local context and regional design strategies — an approach that has earned them extensive work building on Tribal Land. Recent projects include a 17,000-square-foot cultural incubator for the Lower Sioux Indian Community housing classrooms, art studios, and community meeting spaces, and climate change resilient housing built as part of a 34-acre master plan for the Thunder Valley Regenerative Community, which was featured in the Cooper Hewitt exhibition By the People: Designing a Better America.

Under the new name, Ferguson Pyatt is leveraging their unique expertise to bridge the commercial and non-profit sectors with resilient mixed-use projects as well as single-family homes and multifamily buildings in their hometown of Boulder, across Colorado, and throughout the Western US. In a first for the firm, they’ll be undertaking some of these projects as their own developer.

“As a developer, we can more efficiently serve communities, help people respectfully use their land, and take some risks that we might not be able to otherwise,” says Ferguson. “I hope Ferguson Pyatt pushes the profession forward with our workplace structure and business model as much as our building designs.”

Ferguson Pyatt is a studio-based architecture practice committed to a simple mission: build a better world. Bringing together artists, architects, designers, and engineers who share a passion for sustainability, the firm draws on their unique skill set and knowledge base to push the boundaries of design while respecting the people and culture of the places they build. Their integrated approach invites clients, collaborators, and community members into the design process on day one, ensuring each project is built on shared values and a clear vision. The resulting work is meaningful, connected to nature, and enriches our shared environment.